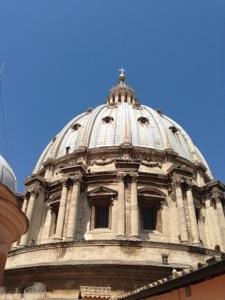 Avinash for the most part has been fantastic about all of the walking we have been doing in Rome.

I haven’t had this much exercise since we trained for the triathlon and marathon.

While Avinash can be very unpredictable with when he wants or does not want to walk, when he does put his mind to it, he shows surprising stamina. For instance, in London, we found a race track and Avinash suddenly wanted to run around the track. Of course, I wasn’t going to hold him back, so we started to run. He would get tired, but then he would start up again. By the time we were done, we had run around the track 5 times! That’s 1 and 1/4 miles! Do we have a marathon runner in the makings?

Well, today Avinash showed that he is also a great climber. After walking around La Basilica di San Pietro, he and I decided we would go see the dome. When we got to the entrance, I saw the sign that said the entrance fee is 5 Euros if you want to take the stairs or 7 Euros if you want to take the lift. And then there was a warning that there would be 320 steps IN ADDITION to the lift. After I swallowed the lump in my throat, I asked Avinash if he really wanted to go see the dome because there was going to be a lot of steps. Of course he didn’t know what the dome was or what we would see, but it was something new and of course he wanted to see it. So we paid for the admission and took the lift up. Once we got out of the lift which took us up about 4 floors, the stairs began.

There were all types of stairs imaginable. Switch-backs, spirals, marble, metal, steep, short, you name it. There was one set of spiral stairs that were so narrow, they had a rope so you can hold onto to something because there was no handrail.

Avinash climbed up those stairs with the determination of Sir Edmund Hillary going up Everest. We passed by many other climbers that stood aside to take a drink or to catch their breath. He led the way and I could feel the determination in him. Part of the way, were walking in between two curved walls. There is the inner dome and then an outer dome with the walkway in between. It was a surreal experience maybe enhanced by oxygen deprivation and elevation sickness.

Of course my Italian is not fluent…yet, but I could tell that some of the people around us were commenting on Avinash and his climbing. Words like ‘bravo’ and ‘bambino’ gave me clues about what they were saying. When we reached the top, we were rewarded with a spectacular view of Rome from the top of the dome. And then there was the journey down that awaited us. Of course going down was not nearly as strenuous, but it is much more treacherous because it is easier to slip going down. Again, Avinash did great. One man turned around and clapped and said ‘Bravo!’ Avinash pulled me down and whispered, ‘That man said something, but I didn’t understand him.’ I told him that he said ‘Bravo!’ which is like saying ‘Good job!’ and that he recognized what a great job Avinash was doing climbing the stairs.

Another lady stopped us and asked how old Avinash was. When Avinash said he was three, she was shocked and started clapping and said ‘Brava! Brava!’